This show seemed to be determined to end the SANESA season on a typically chaotic SANESA bang – six classes all in one morning all over vast KEP and I was determined not to miss a second of anything. I almost succeeded, and I’m incredibly glad that I did – because God did something mighty that day! 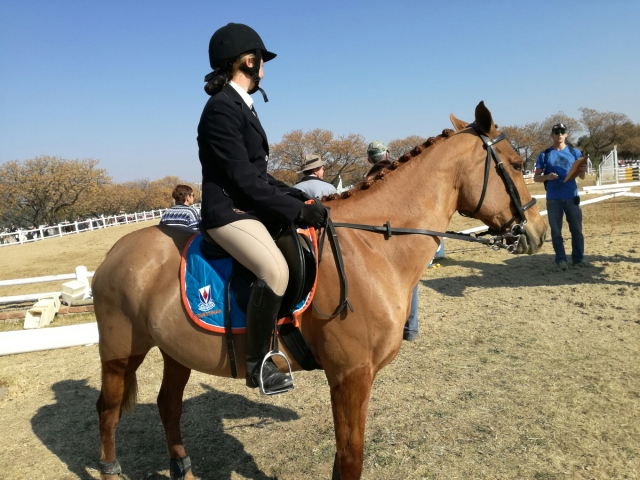 All the ponies and riders absolutely showed up and brought their A-game that day. Pennie was jumping out of her skin – standing off and overjumping by miles. I have never seen her feeling soooo good in her body and she was showing off. They blasted through their A2 speed with G cheering Pennie on at the top of her lungs, me cheering G on at the top of my lungs, and G’s mom and I almost having a collective heart attack. They won it and with a fat margin, too.  No mean feat at Gauteng Finals.

They followed it up by bounding through the huge and technical competition round for 4th place. We’re going to Nationals!

Their equitation was not their best – G didn’t get the chance to plan her test because they were busy winning stuff and I was busy cleaning Zorro so I didn’t even see it, but they still placed 15th. By working hunter they were both absolutely flattened. They tried hard, but Pennie didn’t really have the steam to show a good jump and kept disuniting, so they ended 13th.

I am chuffed. Just a little. This pony shouldn’t even be sound according to what I was seeing eight weeks ago; it was remedially stopping and getting elimination after elimination last year and now look at her. No, look at God – and the things He does! Nothing is impossible. ❤

G also thought (as did we all) that she’d sacrificed her chance to jump at Finals at all when she had to make the choice to leave the last qualifier because Pennie wasn’t quite right. It was a decision I left up to her and she made a mature one, so for this more than anything, I’m proud.

Zorro cleaned up great and headed off to working hunter positively sparkling. I was chewing my nails when I saw the track – both technical and spooky, with some obstacles he’s only seen once or twice at xc schooling. But he and Z-kid plunged forth at the most wonderful hunter pace and proceeded to cruise around majestically, taking every fence in his stride. They had a careless pole, but even so their manners and pace marks were high enough to earn tied 9th and a place on the Gauteng team.

Their jumping track was VERY soft and unimpressive and Zorro was just kind of bored with it and took a naughty pole. Their time was solid and they would have placed but for that, so I am building gymnastic lines as we speak to get the brat to pick his lazy feets up.

This horse was a camel when he arrived and I really didn’t think much of him but God is using him mightily.

It’s not the placings that awed me at this show, although those did feel good. My primary school riders tried just as hard and so did their ponies. It’s that we have really, really struggled with these two horses in the past and they were just in such a happy space this weekend – absolutely knocked it out of the park, and loved it.

God is moving. Glory to the King.

​ Then said Jesus unto his disciples, If any man will come after me, let him deny himself, and take up his cross, and follow me. – Matthew 16:24

The past two months was really a journey in following this verse for me. Our minister preached about this concept somewhere in mid October, and I prayed with all my heart that Jesus would give me the strength to do exactly this. That I would do it, come Hell or high water… and that’s pretty much what happened.

So lots of bad stuff happened:


What’s God’s own stableyard to do faced with such catastrophes? Well, pray and trust Him. And well… Romans 8:28.

We will praise God no matter what the storm. Because our God is faithful, our God is powerful, and our God is in charge.

Nine months down the line and I once again found myself in the position where I had more kids to teach than ponies they could ride. Both Stardust and Thunder were starting to look burned out again, and I frequently had to rope Arwen in for lessons (she was not popular; apparently super-fit event ponies do not make awesome schoolies…). When Bruno was sold, my lesson situation went from just making it to somewhat dire and something had to be done.

This time I had a little cash on hand from the sale, but I knew we’d barely broken even on Bruno and his money had to stretch really far. It’s amazing how expensive the dentist gets when it goes from four horses to twenty-four… Either way, I put up a wanted ad and started shopping. We spent an exhausting morning in Pretoria trying ponies that were so almost perfect, but just… not quite. Then one of the yards right here in Heidelberg put up an advert for one of their schoolies. I gave it a cursory glance and decided to go have a look, mostly just because it was close by. The pony was smaller and older than I wanted, but I was getting desperate. As always, it’s at this point that God stepped in – right where desperation meets necessity.

I tried the pony. It was adorable, but violently spooky and well into its teens. Driving away, I knew the sensible decision would be to say thanks but no thanks. I’d seen better ponies in Pretoria. And yet… something kept me from making that call. There was just something about her that I couldn’t ignore and I didn’t really know what it was. A vibe, a gut feeling. She just felt quiet and gentle even though she hadn’t acted like it. Honestly, though, I believe that feeling wasn’t all about the pony. The other ponies had been quieter, but they hadn’t had the irresistible attraction that this one did. I texted the owner and asked if I could view her again.

The endlessly patient seller agreed to let me ride the pony again, so I arrived, not totally clear on why exactly I was doing this, and remounted the pony. She started to nap near the corner she’d spooked at last time and overjumped a little cross extravagantly, but her rhythm was excellent. She had that I’ll-do-this-all-day, stuck-to-the-track patience of a real riding school pony. She was also sound – sound as a brass bell, healthy as could be despite her age. And adorable, obviously used to children, easy to tack up and handle, and thoroughly experienced. But I was still kind of undecided about the whole thing given the spookiness. What kind of a yard manager buys a spooky schoolie?

Eventually, I couldn’t resist the pull anymore. Nothing else felt right. So I threw up my hands. “Lord, as Thou wilt.” We bought the pony. The poor little soul was shunted straight into my lesson program the next day and became an instant hit. Kids started to fight over who got to ride her, whether they were tiny tots or already jumping. That weekend, I put her and Stardust in the horsebox and shipped them off to do pony rides. It was at the back of the feed shop, with a busy road next door and vehicles coming in and out to be noisily loaded; at one stage an enormous trailer drove in and started to offload 5000l tanks with a tremendous racket.

The new pony was unbothered by the traffic, unphased by the vehicles, and merely walked a circle around me at the offloading of the tanks. She didn’t spook. Not even once. I could almost hear God saying, “Do you trust Me now, daughter?”

She came with the name Lulu, and remains Lulu to friends. But I named her Lullaby, because like the song*, she’s become a reminder of True Love.

* WARNING – mild profanity in the song. Sorry about that, but its message makes it worth the listen.