Today I’d like to talk about something that I feel strongly about, and forgive me if I get a little passionate. I almost wrote “It’s something that the sport needs to hear”, but actually, the sport is generally quite good about this. This is something that the average rider needs to hear. The one-horse rider, perhaps on a bit of a budget, perhaps just having two ponies on a plot somewhere, perhaps the parent watching their kid pop around at SANESA – the ordinary, average horse owner that makes up the vast and overwhelming majority of horse owners in South Africa today.

The something is this: your horse should be insured.

It expands into this: your retired horse should also be insured.

This is Magic. Say hi, Magic. 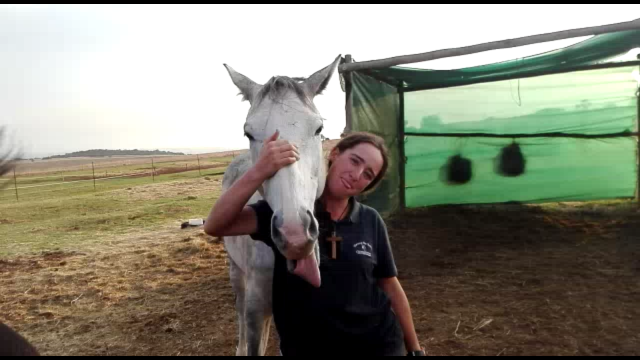 Magic is 11. Magic is also retired. There’s nothing really wrong with him physically, except ordinary OTTB stuff – his feet are a little flat and he’s got a bit of KS going on. We showjumped a bit, and for about four out of five shows he would be amazing and perfect. But that one out of five, he would do one of two things: he would fly backwards across the arena gasping in abject and genuine panic for half an hour, or he would get home and colic. It wasn’t fair on him anymore, so now he decorates the lawn, and has done so for two years.

In short, Magic is worth approximately R0.00. More accurately, he’s worth about -R1500 every month, conservatively, and only because we live on the farm and have grazing.

Magic also has a five-figure vet bill sitting on my desk.

Magic’s vet bill will be paid. Because you just can’t put a price tag on some things, and the horse you retired is one of them. You see, Magic never won any real ribbons and never really got me anywhere when it came to riding. He left me with a collection of bad habits and frayed nerves and two big fat RFs on my record – at the same show. But Magic gets the best of everything. He is a shiny, round, happy 7.5/10 on the condition scale year-round; his teeth are done, his feet are done, and he has all of his shots every year. I don’t spend as much time with him as I would like because at some point I do have to work in order to keep providing him with his happy, lazy existence, but every morning he gets a carrot and a hug and I like to think he still knows that I care about him.

It’s not really about what he thinks of me, though. I don’t take care of him because I’m a warm and fuzzy person. I do it because I honestly owe it to him to give him the best and happiest life he possibly could have and even if I succeed for many years then I will still forever be in his debt.

He’s not just a horse or a fine companion or even a best friend. He’s an instrument of God.

Magic gave me a part of who I am, a good and loving and compassionate part.

A thousand vet bills will never, ever be enough to pay him back.

Here’s the bottom line. It doesn’t actually matter how lyrical I can wax about how much I love my priceless retiree or what he’s done for me. Of course I wanted to save him when he colicked this week. The fact remains that if he hadn’t been insured, all the wanting in the world wouldn’t have done a thing. Even what I have done was almost not enough; he needed a surgery that I couldn’t have paid for – to be fair, these surgeries extend into six figures – and it’s only by God’s grace that he’s still with us.

I didn’t have him insured for that kind of money. But I had him insured for something; enough that he could be in hospital on a drip and receiving professional, round-the-clock care by someone who wasn’t emotional, drained, and ultimately out of their depth. This time, it was enough. You better believe he’s getting better insurance in case there is a next time.

This is the real value of insurance. Not something to protect your financial investment, but something to save the horses that financially aren’t really worth saving; the horses that gave you everything and now stand in a field somewhere, hopefully with you, a bit old and ugly and broken. They gave you their hearts. Now it’s your turn.

I’m talking to you, average rider on your average horse. You the lady doing Prelim or EV60 on a Boerperd or an OTTB or a nondescript little bay horse of uncertain ancestry and deep, gentle eyes. You the daddy paying for your kid to ride. You the doting horse mom with two Shetlands in your backyard, piggy-fat and eating carrots and thriving. You all feed your horse enough and make sure he’s dry in the rain, but are you ready for a colic surgery? Are you ready for a night at the vet hospital? Are you ready for diagnostics, treatments, drips?

Medical aid starts as cheaply as R160 per month. If you can compete in one single training show class or eat out once a month, you can afford this.

I shouldn’t really be asking you if you’re ready to pay to save your horse. Rather, I should ask you this: Are you ready to watch your horse die because you can’t?