Jamaica belongs to one of the yard kids. He arrived in January 2016, one of our very first official liveries, and promptly broke his scapula trying to leap out of his new digs. After a long rehab, he made a miraculous recovery and is now as sound as a brass bell.

Unfortunately, he ruined this victory by misbehaving with his child, finishing by bucking her off onto her arm, breaking it in the process. The child’s recovery was far quicker and also miraculous, but I’d had enough. Jamaica was grounded from being ridden by his child and put into boot camp with mean Auntie Firn.

After getting over his delinquency, Jamaica proved to be a thoroughly nice chap, a real honest point-and-shoot kind of jumper. I was in search of something to develop my confidence and eventually jump Module 5 (1.00m) on, and he fit the bill, so his owner and I came to the agreement that I would lease him to jump on and eventually pass him back to her once she was going juniors and strong enough to handle him.

I rode his first class on him in February 2017. That winter, we jumped our first 80cm, and moved up to 90cm in the spring.

Jamaica is an attractive, loveable idiot who loves all people and all forms of food. He’s never really bothered by anything very much – even breaking his shoulder wasn’t much of an ordeal for him – and did whatever I said with a slightly bemused air, knowing full well I need him. We have managed to curb his brain’s habit of evaporating completely, which has made him dependable and one of the easiest horses at the yard. He doesn’t hold weight, doesn’t have a pedigree, and doesn’t stop, and God knows exactly what He’s doing with His rollercoaster plan for this horse.

We competed for 2017 and 2018 until I handed him back to his child, who is aiming for the bigger grades with him. He carried my nervous behind around with courage and loyalty for two years, and I’ll always owe him for that. Jamaica deserves a gutsy teenager to jump the socks off of everything now, so I gave him back to his kid, but he’ll always be one of the horses that changed me. 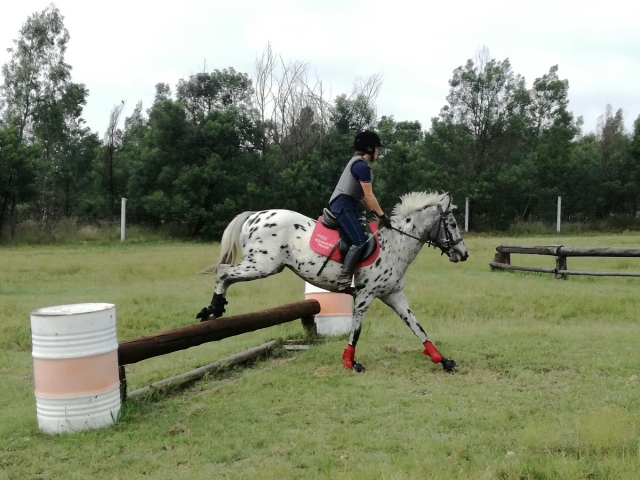