The guys and I made good on our resolution to spend more time outside of the arena two weeks ago. 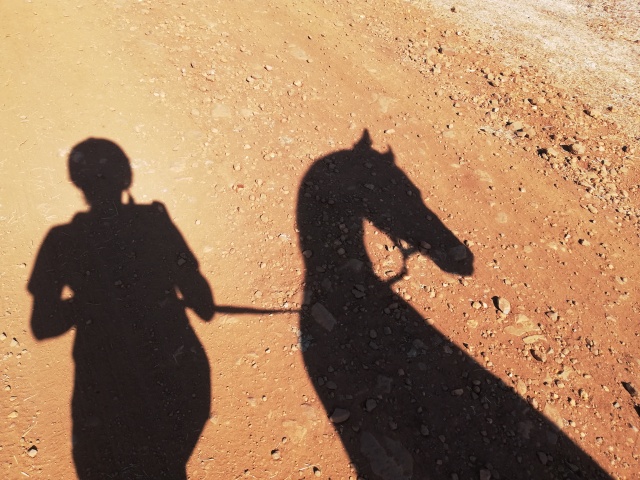 Lancey is already a lot less spooky for taking little walkies before and after his sessions, and Thunder went out to a hillside to work there – revealing how DEEPLY unfit he still is. We only managed to canter (light seat, very forward) about 5 circles in each direction before the poor guy was visibly flagging. It did help him to carry himself a bit more in his next schooling session, but as we found out in our lesson on Friday, this was nowhere near enough. 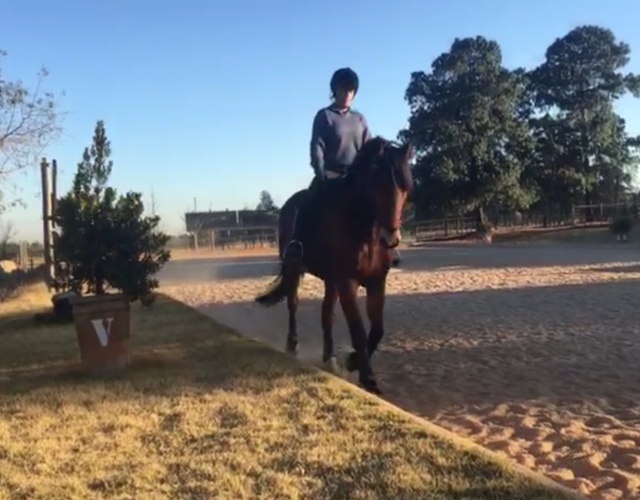 Darling is home (yaaaaaay!!!) so at 4:30am on Friday morning he was blearily helping me to push two recalcitrant geldings into the box. Neither of them was amused with being dragged out of their nice warm stables to stand in a horsebox for two hours, but they eventually got in and off we went.

Both of them were pretty relaxed when we got there and put them in the paddocks that J super kindly provided so that darling could watch, take videos and freeze rather than hang onto a horse and freeze. (Poor old darling knew what he was signing up for).

J was much happier with Thunder’s shoulder-in and leg-yield, albeit reminding me (repeatedly) that more inside leg is not the answer to everything in the leg-yield – if it starts to lose straightness, I probably need more outside rein. (Always, more outside rein!) The moment we began to canter, however, J was instantly dismayed. Thunder had only been working for about 20 minutes and he was already over it, so I flapped and kicked like a kid on a pony and so he bucked and kicked at my leg. It wasn’t pretty. J ordered me off and sent us to the lungeing ring, where, embarrassingly, he proceeded to teach me everything that I thought I already knew about lungeing. I kind of pride myself on my good lungeing technique, but apparently I have a Thunder-sized blind spot. We were sent home with a scolding and the other to do at least three days a week of lungeing to get his back and bum fitter without me flapping around up there. 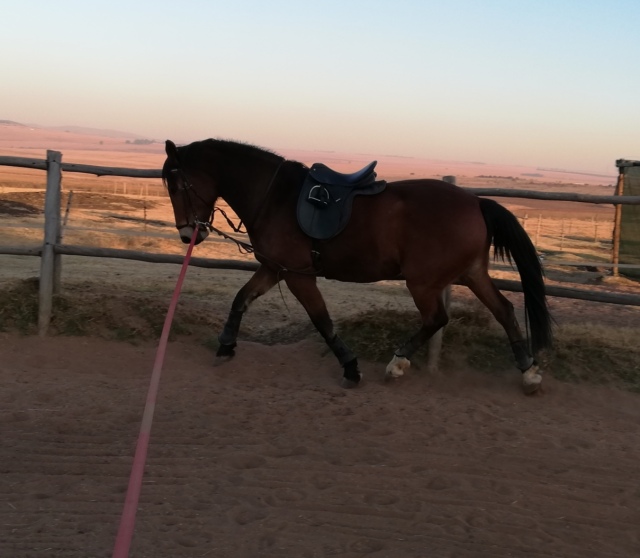 We obediently got to work once we were home, and after only two or three sessions, I was already seeing a HUGE difference in the way Thunder could carry himself. It felt a lot better once I got back on board, too. He was carrying himself instead of needing to be pushed, and the result was that everything – particularly his canter – was much better and much more pleasant for the both of us.

I’ve tailored his schedule now to do 3 days of lungeing, broken up by two days of schooling with a little hack before or after for a change of scenery. It seems to be working, but the proof is in the pudding, ie our ride n go (at Elementary, for fear of being crucified by a wrathful J) this Sunday. 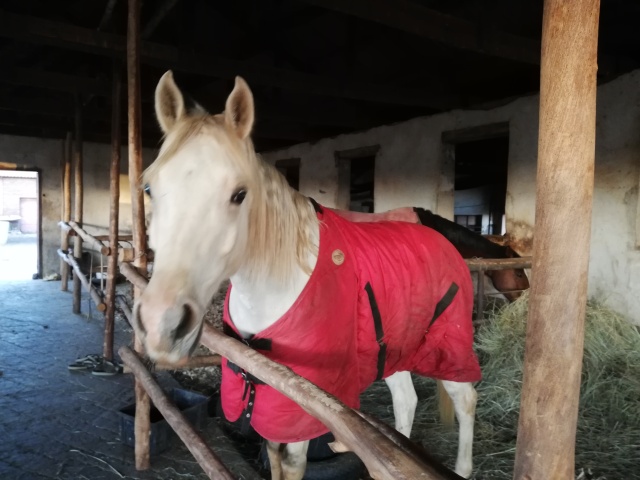 Lancelot was a model citizen for his lesson. Thunder squealed and bucked in his paddock while Lancey and I headed to the arena (literally 15m away) but the crazy wild Arabian himself couldn’t be less bothered. He did spook massively at a very threatening pile of rocks, and he was frankly perplexed by the mirrors, but after taking one walk around he was ready to work.

I was a little worried that J was going to take one look at my new horse and hate him forever. He is, after all, all of 15 hands and not the most conventional dressage breed. Maybe J would see something that I’d missed. My fears, however, were utterly unfounded; J proclaimed him “not too shabby” (high praise) and said that his inherent hotness will turn into expression later on. That was exciting, because Thunder is many wonderful things – forgiving, kind, strong, balanced, supple – but hot and expressive are not on that list.

J had us start with little “shoulder-outs”, or leg-yields along the wall. Lancey has never done these before but he tried very hard. J reminded me that considering Lancey has no topline at all, everything we do needs to happen slowly. He doesn’t have the bodily strength to go forward and in balance just yet. So our leg-yields could happen at an absolute crawl. So long as his four footfalls were correct and he was straight, he could take small, slow steps. This helped a lot, as I was trying too hard as usual, and soon Lancey cottoned right on.

We moved on to trot and canter work on a 20m circle and J told us more of the same, similar to what M was saying: slower and more rhythmic until he can balance. J also encouraged me to allow Lancey to hang on the reins if he wanted to, using me as a fifth leg when he lost balance. This helped Lancey a lot as he began to lean on me with his back still up instead of hollowing and running forward. We only did about 20 minutes before J had us stop there and sent us home to do slow, rhythmic work allowing Lancey to find his balance. 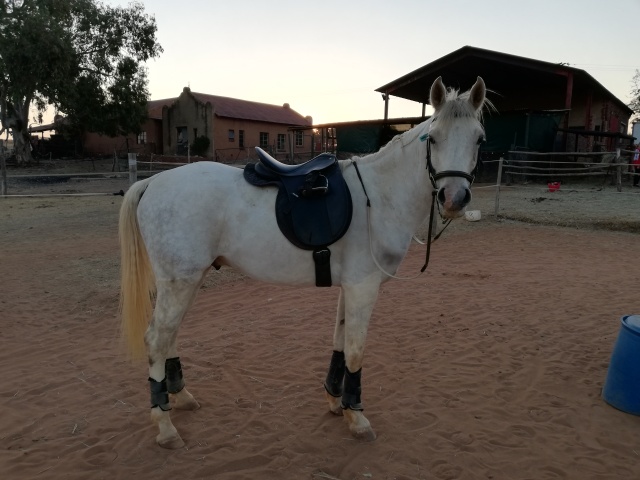 I have a tendency to get ahead of myself with Lancey because I want to ride him the way he was when I had him in full training two years ago. Back then he was more than strong enough to pull out a high 60s Prelim test without any effort, and jump a couple of small tracks the same day. But he’d been in consistent work then for more than a year. He’s actually got quite a lot of miles on him, but I need to start treating him as if he is a complete greenie and rebuild him from the bottom up. 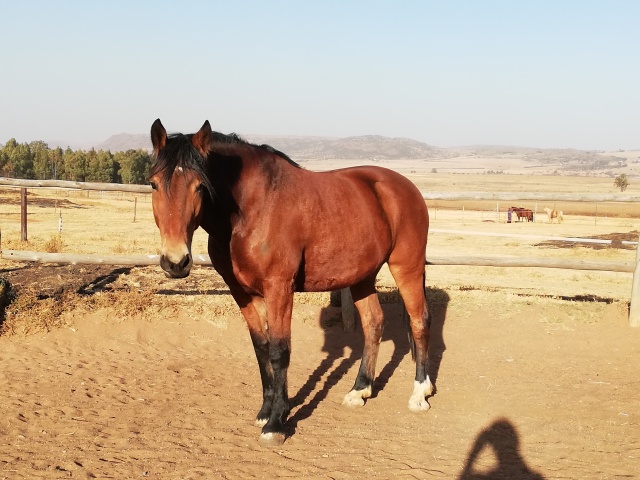 Grace is everlasting. Glory to the King.

One thought on “Boot Camp”