And then you get some horses that like people better than horses. Or perhaps you only get one – I’ve only ever met one, anyway.

Long-term blog readers will recognise a little grey Arabian gelding named Lancelot. He came to our yard on New Year’s Day 2016, the third livery we ever had. I started him that year for his kid and competed him through most of 2017, doing some jumping and dressage. He was one of my all-time favourite horses ever: not the most mentally engaged little chap, but as good and kind and genuine as they come.

Lancey also had his fair share of quirks. He was slow to mature mentally, always distractable, and much more interested in drooling on your shoulder than actually doing anything. We fooled around with gentle work for almost two years before, one day at a show, his little ears suddenly went up and his tail flagged and I felt the light bulb go on. Oh, this is what I’m supposed to do! Nothing could stop him on a jumping track ever since; I handed him over to his kid and he jumped everything in sight. She competed him throughout 2018 and the only elimination he had was for jumping a random fence sideways in the jump-off.

Lancey’s upbringing was something of a unique one. He was the first offspring of English import Silvern Lance, a mostly Crabbet stallion who also happens to be one of the kindest and most generous horses you will ever meet in your life. His dam, Al Shama Pamirah, came from old endurance lines and also failed to have any milk for little baby Lancelot. The breeders hand-raised him, and he grew up into something of a gigantic puppy.

Unlike many orphans, though, Lancey didn’t grow up to be a socially crippled monster. He was still living in a herd and so he has all the social skills he needs. He just chooses not to use them. He lives in a big field with a large group of others, who tried to pick on him at first, but boss mare Arwen took him under her wing and protected him for a while until the others left him alone. Now, he peacefully coexists, but most of the time you’ll find him grazing off in a corner by himself. Happy as a clam, just not involved with the group.

But when a human being sets foot in the field, he’s the first to come gambolling over, with his funny little Arab tail over his back.

It’s hard not to be happy when you’re being drooled on by Lancey. He’s a truly happy, friendly, sweet guy who just wants to be your friend. He goes out of his way to spend time with people as part of his herd, and while it’s not very normal, it’s certainly good for the human soul. 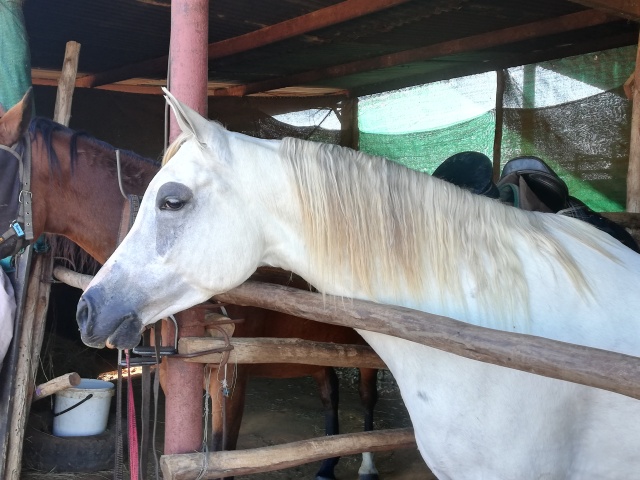 Lancey’s people ended up going through something of a hard patch. And so, at a time when I really shouldn’t have another mouth to feed, I’ve found myself with another horse. Another dream of a horse: a beautiful, well-bred white Arabian with a heart of gold.

I don’t know where God is going with this. I don’t know if I’m going to be able to keep him. I don’t even really know what I’ll do with him if I do keep him. For now, everything happens one ride, one cuddle, one glob of friendly pony drool at a time.