After weeks of our plans being thwarted due to, variously, Thunder being sick, me pitching off of Rio and hurting myself, and then both of us being unfit, we finally managed to schedule a lesson for last week. Poor darling found himself boxing us across the province in rush hour traffic, but he did sign up for it, poor wonderful chap. 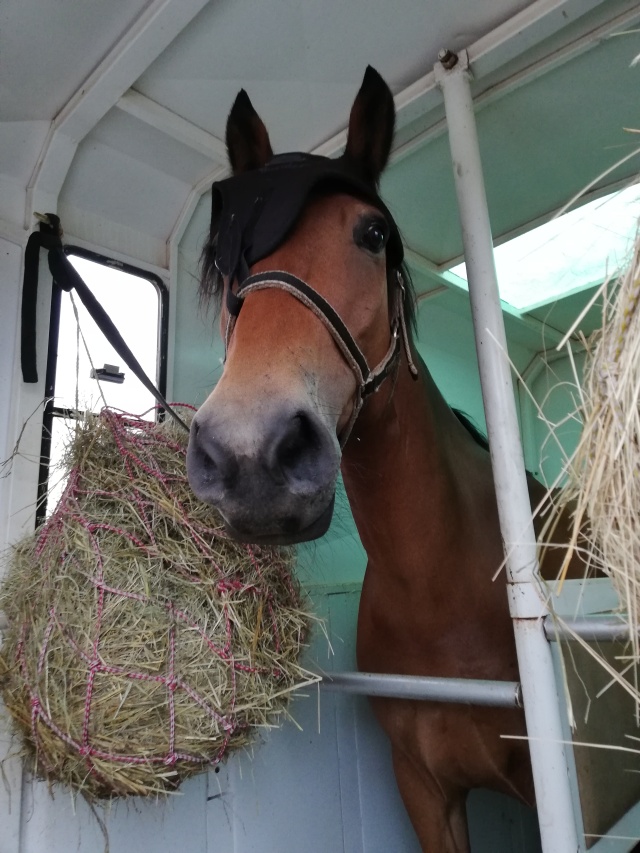 Thunderbird is still not super fit, but able to do half an hour of solid work, so I figured it was time that J helped get us back on track.

We’re still struggling with the same things: downwards transitions, angle and suppleness in shoulder-in, collection and mediums. I mentioned this to J when we arrived. He doesn’t seem too concerned over our mediums: they are generally straight and not rushing, but not yet very powerful, which he says will come with strength and practice.

The first thing J wanted to address was the shoulder-in. At our last show it was one of our worst marks, with the judge saying there was too much angle and not enough suppleness. At home, obviously, I decided that this would be fixed by pulling the inside rein (plot twist: this didn’t work).

J doesn’t want too much bend in the shoulder-in, as the exercise is not about bend as much as it is about the connection on the outside rein. Instead, he wanted Thunder more active, more connected into my outside rein, softer on the inside rein, and a lot rounder. As we push into shoulder-in I tend to forget everything and concentrate only on getting the angle, thus losing the activity, throughness and connection, with the result that when I put my leg on for the movement he immediately slacks off by losing his hindquarters and throwing up his head.

So our homework there is to ride the transition from straight to shoulder-in as just that – a transition, during which the activity and connection must be maintained. J also mentioned that riding him a little lower and deeper – longer in the neck, but with the poll down more – helps to supple and stretch him rather than fighting with him in a perfect competition frame. It’s also vital that I ride him in the right angle. He needs to be so rhythmic in the angle and so soft and supple in the connection – not over bent, but soft – that I could even ride him in shoulder-in right while bending his spine to the left, essentially turning the movement into renvers.

On the subject of the trot, J also warned against making him run. He needs to be more active now without being faster – I need to slow the legs down to create a collected rhythm.

He also needs to stretch down significantly more, but this he does really nicely at home. At home he’ll take his nose to the floor – his relaxation levels at other venues always negatively affect his connection and ability to stretch.

This was evident when he decided to have an enormous spook in the middle of the short side, resulting in a hilarious screenshot and a few dry comments from J.

Moving on to the canter, first we worked on the collected walk. J says that it’s impossible to ride a good transition to collected canter unless the collected walk is outstanding. He needed to take significantly shorter steps, without losing the activity, and be softer and more yielding in the bridle as well instead of going against the hand. Only once the walk was perfect were we allowed to canter. The canter itself had to be much straighter as I tend to permanently ride him in too much inside bend. Once the canter is straight, the transition to walk can be through and balanced.

I was really happy about how Thunder behaved. He was a bit tense and a bit behind my leg, but the long drive had much to do with that, and he was trying very hard as he always is. I am a bit disappointed that the shoulder-in is still a problem but now we have more tools to work on it. I asked J if we were making progress, though, and he seemed to think we were doing just fine.

After the lesson I asked J what we should be doing show-wise this year and he said that the priority with competitions is to get him more relaxed. So the more small cheap local shows we can do, the better. I haven’t renewed our memberships so we’ll be doing training shows for a while – we may end up having to do all our grading points again, but that’s all right.

Well with my soul, dancing with my horse. Glory to the King.