An old farmer around here used to say that once there was mist on the river, the frost would come in seven weeks or less. In seventeen years, he hasn’t been wrong. 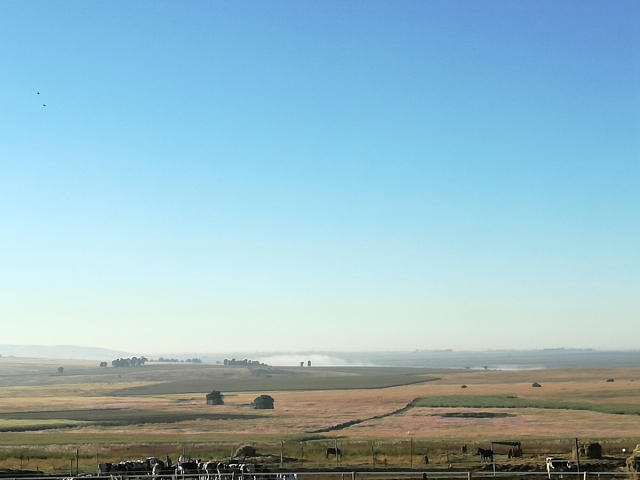 Sunmer draws to a close, promising the end of midge season – and therefore AHS season – and summer coats, and boxing horses in daylight for shows.

It also means cosmos season, and that means outrides. Summer never goes out without a fight; it always puts on a last defiance in white and purple. It’s the best time for hacking. 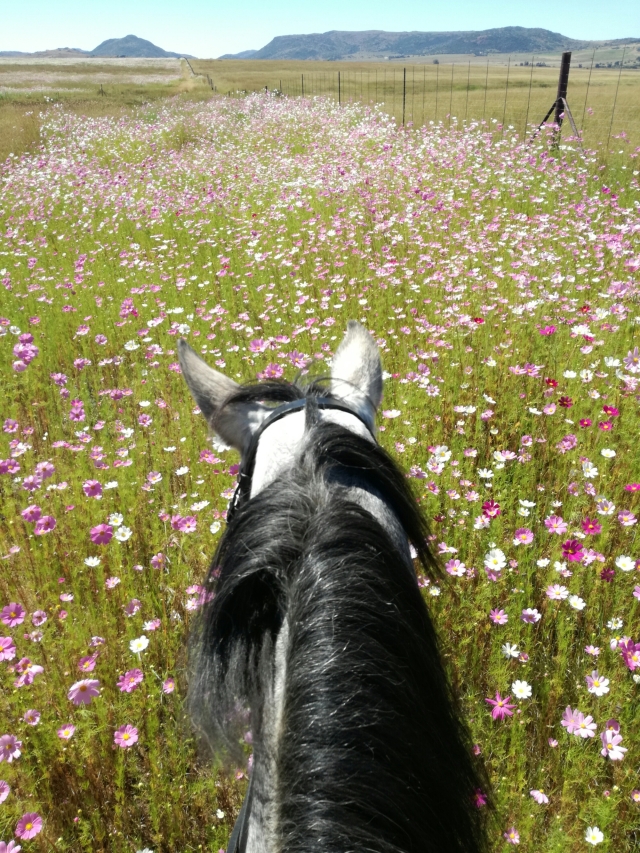 Arwen was so quiet today I was kind of worried, except she would not stop eating the whole time. Arwie LOVES cosmos flowers. She didn’t bat an eye at anything and was a total pleasure.


We rode in between the fields of ripening maize,

in and out of the weird hole with the epic banks,

and through the field of gently waving hay, almost ready for its first cutting.

We even got to see a pair of rooibok… cows? Ewes? Lady rooibokke, anyway.

The horses were wonderful and seemed to enjoy it as much as we did. We kept it pretty slow for the little kid’s sake (and mine), but they were all super. Vastrap was hot of course but never bad. Renè, Lulu and Dusty were perfect.

In other news, we’ve had a peaceful week so far with today being a public holiday. We got a bunch of riding done yesterday between K and I, so today is a little slow. Jamaica’s flatwork has shown an improvement again. Arwen ran through Elementary 4 – one of the tests she’s riding on Friday – without apparent effort. Sunè popped through a little working riding test, including straw bales (the only thing that’s ever given her pause in a working riding class), in fine form.

Thunder is now very relaxed in the dressage arena and even packed K over a fence with straw bales under it at 80cm without apparent difficulty.

Midas and Lancelot were introduced to our new jumping stuff. We got ourselves a white plank, which will shortly be a white plank with Scripture painted on, and a picket fence. Lancelot was TERRIFIED at first, Midas couldn’t really care less and both boys jumped great in the end. Midas has been pretty point-and-shoot – he’ll jump the first time, every time.

Eagle and Destiny both got visits from their respective parents, and both pleasantly surprised me. Eagle is a good guy but he can be rather on the sensitive side so tactless handling sets him off like a firework. I coached his mom through lunging and he actually did fantastic – didn’t get in a flap at all if she made a mistake or two. She cottoned on really quickly, too, and by the end of the session they looked quite harmonious.

He’s still a little flinchy about flappy stirrups and having me jump up and down next to him, though. Definitely not ready to sit on just yet.

Destiny has been driving me up the walls by protesting that the dressage arena is Scary and therefore he can ignore all my aids. We had some arguments for the past two weeks, but yesterday it all came together and he gave me two circles of canter each way in the “safe” end of the arena. And today his mom rode him for the first time. He gave her three gaits without batting an eye. I think he feels a lot more resistant than he looks – because he looked fantastic.

Little Trooper also had a breakthrough; we seem to have effectively eliminated the napping. He’s still not the most forward-going chap but consistently gives me walk/trot/canter on the lunge. The canter still needs building, but the balance is there, just not much strength yet. So we moved on to introducing the bridle. I think his rescuer must have done this already because when I put it on his reaction was this:

The rest of the week will be consumed by preparing for Nationals on Friday. It feels like quite the doddle compared to HOY, so let’s see how it goes. Always in God’s Hands.

One thought on “Mist on the River”