Despite my misgivings about the former after her spectacularly reluctant first session, both Zara and Tara have been progressing beautifully. After Zara ran through the side of the lunge ring twice – with me flapping helplessly along behind her on the end of the lunging rein – I groused that this creature must be both unwilling and stupid, but as usual I was wrong and have been forced to eat my words lately.

She always had this blank look in her eye during her sessions, but soon I started to realise that it wasn’t because she didn’t have a brain – it was because the brain was not with me. What exactly she was so inwardly focused on, nobody knows. There are no physical issues. Maybe she was just never asked to actually think before. Whatever it was, as we went on, I started to get moments where the light would come on and she would focus and be truly brilliant for thirty seconds or until she made a mistake and had to be corrected and went all blank again. The blankness was maddening. Training was, well, training; there was no conversation.

These days, though, my “stupid” student has become a responsive, willing, and present partner who actually talks to me and processes information – quickly, too. She’s turned out to be sensitive, forward, alert and just a little quirky so instead of her being just another dumb baby we have developed quite the rapport. Just goes to show how some horses never show who they really are until you bother to ask.

So we have progressed from trashing my lunge ring to carting my butt quite happily around it, so far just in walk, but I look forward to rapid progress. For her owner’s sake I hope she sells like a hot cake and will do my utmost to make it happen, but on the selfish side I do hope I get to show her once or twice first.

Tara has always been her sweet, cuddly, obedient self so of course backing her has just been easy; nothing remedial to fix, no bad habits to change, no mindset to try and alter. Just a simple matter of training responses and getting used to tack. I was on her in short order and we have also been taking a few little steps around the ring.

Tara is kind of worried lately; I don’t think she thinks she’s going to be hurt or frightened, but she does look a little stressy about new things or things she finds hard. It would be totally in keeping with her nature for her to be a bit overly worried about making a mistake. I think I need to have an even lighter hand and encourage her a little more and it should be OK. Then again maybe she’ll take advantage and throw me clean over the side of the ring; I suppose one never really knows with horses. Although Tara is highly unlikely to attempt such a drama. 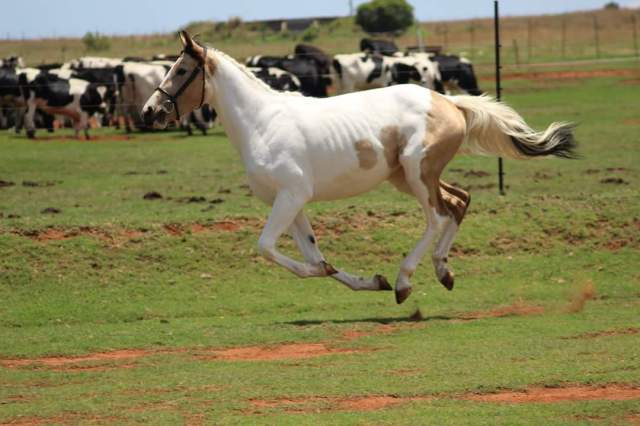 Also, I officially adore Capstone feeds from now on. When T arrived she was a 2/10 and 14.3hh. Five months later she is a 5/10 and touching on 15.2.
Much as I also enjoy her, I kinda hope T sells like a hot cake too because she will thrive with a nice, patient adult ammy that is quite content to take their time and just relax and enjoy the connection. I do my best for her but regrettably one can’t just fool around so much when there is a client involved. It’s just unfair. But Tara is going to make an ammy very very happy – and vice versa.