We arrived at Sunlands only moderately late, which was rather impressive given that the wheels had fallen off on the way there. Literally.

Okay, so it was only one wheel, and so there were still two very precarious wheelnuts holding it on, but it was the closest I would ever like to come, thank you very much. We limped the last ten kilometres, with the Mutterer and I both eyeballing the wobbling wheel in the rearview mirror, and made it on a wing and a prayer. Also literally.

Once there we unloaded the motley crew: Lancelot for his first outing at ground poles, Zorro and his kid (let’s call her Z-kid) for 60 and 70cm, working student K and her Nooitie mare Renè, and Magic. The latter was eye-poppingly nervous and spooking wildly at nothing, his adrenalin absolutely sky high and my heart correspondingly low. It looked like another disaster was imminent, but I had zero intention of clocking up yet another rider fall this year and had basically decided to just hack in the warmup until his brain came back.

Turns out God decided to use this for good, as usual. Instead of a disaster, my ride was an epiphany.

I have always been looking for the magic solution (no pun intended) to Mr. Quirkypants’s panic attacks. Always looking for a trigger or a quick fix or just some reliable way to talk him down off his ledge. Never finding it, I’ve always had to resort to just walking him and staying calm until he got calm. And on this day I stumbled across two facts that I am just stoked to finally know:

I breathed him down. I always try to settle myself before working on the horse, but when I got myself settled, he was miraculously settled! A rudimentary principle I suppose, but I have just never seen it so dramatically before.

So I got myself back and then he came back and we jumped all clear rounds for third in the 70cm. Here’s jump-off video! We even angled a fence!!

Zorro and Z-kid had a superb show. At his last one he had two eliminations and I was ready to wring his neck for him but I must apologise to him because he hasn’t run out, not once, since the chiro saw him and put about a gazillion bones back into alignment. Sorry Zorro.

This show he was totally on his game despite last competing in April. They won the 60 and were well on their way to winning the 70 when during the jump-off one of the Z-kid’s stirrups came flying off. The stirrup bar was faulty and the whole thing just popped right off and klonked poor Zorro in the knees. They were halfway over the first element of a combination but Z-kid didn’t even wobble and rode the second element with one stirrup and great poise, to applause from the audience. They had to retire, but on the bright side I now have an awesome story to tell the kids when they don’t want to do no-stirrups.

In between all this I was also riding Lancelot in the ground poles. He boxed, travelled, waited and behaved like a superstar; I had like two and a half seconds to warm up in a teensy arena with a thousand tiny kids on schoolies, but he was right there with me. Nervous and sticky of course but listening. His first round was rather halting and wiggly, but he trotted the second one very happily with only one enormous steering glitch. For a spooky Arab, I’ll take it any day!

K and Renè had their first outing too but Renè is a Nooitie so she came out completely chilled and babysat Lancelot. They just pottered through their ground poles without turning a hair even though poor old Renè has jumped exactly one fence in her life and never been ridden at a show before.

Super happy with them all. To God the glory. 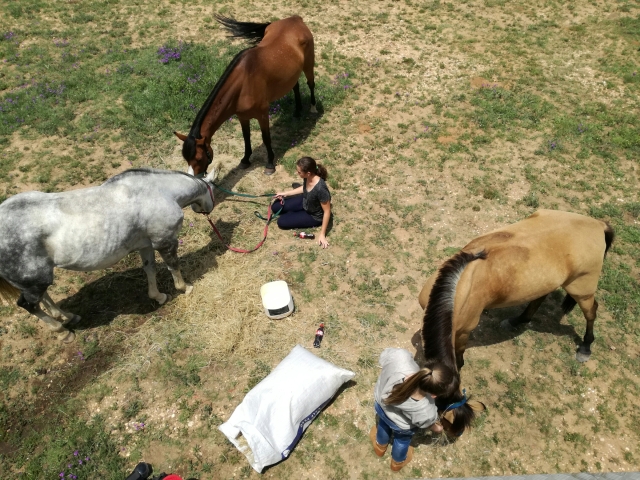