The 10th January training show at one of my favourite venues was a no-brainer for the first show of 2016. I spent the days leading up to the show dead nervous. Recently back in work, Magic was performing brilliantly; he jumped everything I pointed him at in style and sensibly, and I was confident he’d make short work of the little classes I’d chosen for him. But the last time we showed Magic was when he colicked so badly and I had no way of being absolutely sure that he wouldn’t do it again.

Still, we had the all-clear from the vet, and armed with drums of water and ample nets of the best hay we could find, the Mutterer and I braved the challenge with Magic and Liana. It was Liana’s first show over fences but I wasn’t overly worried about her. She had been jumping 80cm at home without a moment’s hesitation; her first combinations and oxers had gone effortlessly. She has a natural eye and enthusiasm for jumping, which, combined with her careful technique and abundant scope, is going to make her one epic eventing pony.

Magic was very nervous to load but consented to get in without too much of a fight, and once Liana had pretty much self-loaded, we were off. Both travelled very well and got off relaxed and ready. I was a different story – late, as usual. Luckily the Mutterer saved my butt by having the little mare saddled by the time I got back from entering.

Liana was bright-eyed but quiet as I walked her to the warmup, but once we got there, my heart sank. It had poured the night before in Kyalami and the arena was basically underwater. All three practice fences had approaches and landings in water and Liana has never been asked to deal with water before. Figuring that at least she’d learn something if I spent the entire morning just getting her into a puddle, I climbed on, walked her around on the dry perimeter, and then aimed her for the water. Liana strode over, dropped her nose to have a sniff, and walked right through it, without any trouble. 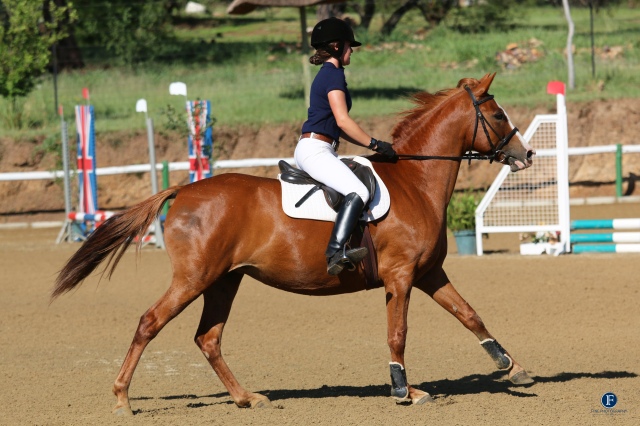 The little Nooitie proceeded to be completely awesome for the rest of the show. She galloped through the water, jumped in and out of it without batting an eye, and spooked at exactly nothing. We went into the 30cm feeling good; she had a good look at the few jumps with filler in them and overjumped everything by miles, but never stopped, shied, or bolted. She did have one violent wiggle over the first element in a related distance, resulting in my saddle (even its XW gullet being insufficient for Liana’s considerable girth) slithering horribly down her side; the adrenalin rush was such that in five strides I had kicked it straight again and we made it over the next fence without further ado.

The 40cm was even better, and by the 50cm, she was ready for anything. She jumped sensibly, behaved beautifully and would probably have won it if she hadn’t misjudged one fence, rushed a little and brought the rail down with her hind toes. Unfortunate, but not bad at all for a first show over fences. For the rest of the show she was completely calm, happy, and well behaved.

The same could not be said for Magic when the Mutterer brought him up to the warmup. I could spot my horse from inside the show ring: he was flying on the end of his lead like a kite, striking out dramatically with his forelegs, his tail stuck straight up in the air. The less-than-impressed Mutterer gratefully clutched at his precious Nooitie, opining that “your horse is not right in his head”. I thought better of asking for advice because the Mutterer’s thunderous expression suggested that any advice from him may include a bullet, so I just got my reins and got on my horse. Or the leaping thing that my horse had morphed into, anyway. Wherever Magic was in his head, it wasn’t a quiet warmup arena at a training show; there were dragons, and he was scared, and he was going ballistic.

He napped extravagantly, shooting backwards towards the gate, threatening to rear when I put my heels in him and throwing his head madly when I touched the reins. He was hypersensitive to everything; he struck out with his forelegs constantly and shied at the most random little things. But he never bucked or tried anything malicious. So I did the only thing one really can do with Magic; sat tight, closed my calves very gently around his side, and spoke to him until my voice penetrated the darkness in his head. At length, he stopped reversing and took one tentative, dancing step forward. Then another. Every step floated; he felt like a bubble, as if my smallest movement might burst him. But he kept going all the way around the arena, splashing through the water, and slowly he started to come back.

The work settled him by degrees. Once he was walking more like a horse, I gently coaxed him up to the trot, and we trotted until his brain came back and he put his little nose down and concentrated. From the trot we jumped the cross-rail a couple of times; he overjumped wildly, but I just stayed out of his face and a few jumps calmed him some more. Before we could address the canter, it was time to go in for our class.

This was somewhat disastrous. Bits of the arena were dry and other bits were damp; all the footing was safe, but Magic considered the lighter, dry bits to be terrifying. He shot backwards across the arena again, shaking his head, dancing sideways, shying at shadows. We stopped at the first fence because he was spooking at the dry ground behind it, then deer leaped it. The rest of the course was much the same. It was 50cm and he trotted, flailed, leapt and generally forgot how to horse. One thing was for sure, at least: we had absolutely no poles down.

After that we went straight back into the warmup and cantered around, and his brain, thankfully, continued to come back. We popped over the vertical and oxer several times and Magic started to breathe at last with his little fluttery OTTB snort at the end of each stride. Going back in for the 60cm, I at least did not have to beg my horse down to the start, but he did refuse the first fence again. I brought him back calmly and he jumped it. About four fences in, he landed in a canter and stayed in his nice smooth rhythmic canter that was custom-made for showjumping. The rest of the course went beautifully; he took a deep breath and relaxed and my horse was back. I did make a mistake at the last fence by asking him for the longer distance as he approached – a habit; he prefers a long spot – and he gave it to me along with about a metre of additional height, landing so hard my hat fell over my eyes, but we’d made it through another class and he was feeling better and better.

Warming up for the 70cm was like riding at home. He doddled around on the buckle, sneered at the silly horses that wouldn’t go into the water, and jumped everything flawlessly, obediently, passionately the way only he can. Going into the class he had never felt so good. We were the first combination in, so we walked up to the spooky judge’s box at a flowing dressagey walk. I closed my hands and knees ever so slightly and he stepped up into the most perfect square halt. With a leisurely salute, we opened the class. The announcer enquired, “Is this Magical Flight?” in tones of disbelief.

He has never jumped a class as well as he jumped that one. We galloped the longer stretches, collected up perfectly for the related distances. He never looked at a thing; all he had to know about a fence was which side to jump it from and he was over. I fluffed my approach to the combination; he took the long spot and saved my ungrateful bottom. I caught him in the mouth a little, he overjumped and landed smack in the middle of this little one-stride and Magic bounced out with not a second thought. He is a horse in a million. What am I saying? He’s one of a kind. I nearly cried when we loped through the start and fell on his neck hugging him and thanking God because I don’t deserve him. Nobody does. Nobody ever could. But he’s mine, and I can never feel not good enough for him again, because I’ll never give up on him and for Magic that is enough.

The best part? He ate, drank, and pooped with the best of ’em. He came home, ate his grass, had grated apple for dinner and went back to life without missing a beat. My horse – oh, but he could never be; God’s horse – is back and he’s just fine. And the two weeks of suffering that we both endured – he in his own pain and discomfort and confusion, mine in the agony of empathy – the horrible ordeal that could have ended in tragedy – it was turned around and made to work for us because we serve an amazing God. Magic and I have never been closer. We didn’t quit on each other and we both know it and we never will.

It sounds a sentimental, perhaps. But with the strong smooth curve of his neck in my arms, with the power of the pulse in his neck beating against my skin, sentimental can be true.

Thank You Lord for Your amazing love.