Inanda Country Base’s massive green property reeks of old-fashioned horsiness. One can almost imagine you are somewhere deep in England; the immaculate British-style stable blocks, vast green fields and baying of their hunting hounds in the early mornings sends a shiver down the spine. I loved it there. Arwen did too; she spent her first night in a real stable and didn’t even kill anyone, though I did take the precaution of taping my phone number to her nose in case of any nightly escapades, so she looked like a complete idiot. 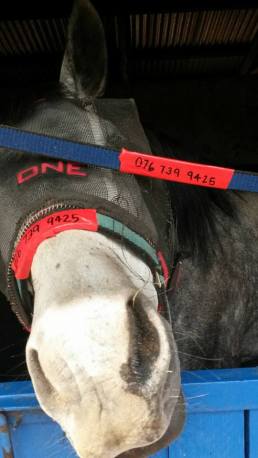 Dressage was in one of the epic green fields, which was so big that three dressage arenas and a warmup ring of enormous proportions fit in effortlessly. Unfortunately, the dressage arenas were marked off by white ropes near the ground. This is fine and safe and useful, except Arwen said the ropes were Poisonous Electric Snakes and politely declined to go straight beside them. She had the best warmup in the world and then came down the centreline like she owned it and then did a perfect, unrequired haunches-in down the track, in all three gaits, and every time we went on the track. Our circles and transitions were beautiful enough that we earned a respectable 60.7 penalties (60%), landing us, as usual, squarely in the middle of the field at 8th out of 15.

Showjumping was directly after dressage. I only barely had time to yank on my bib and grab my jumping crop and we were in after a brief warmup. She was coming in very close to the fences but jumping willingly enough, so I just let it go. Honestly, though, I felt like a blob of well-chewed bubblegum. Squashy and colourless. A hectic week – 16 hour days, nine rides a day, feeding and admin on top of it all – had left me frazzled by that morning, and dressage had drained whatever brainpower I had left. We came through the start flat, scraped over the opening oxer, and took the second rail. I woke up enough to flap my crop at her as we approached the easy vertical at number three, so we made it over that. Number four was an oxer with filler under it and as we came around the corner at it, I just sat there. Arwen found exactly zero support and dawdled to a halt to look at the filler. I approached with somewhat more zeal and we made it over just fine the second time; number five had looked scary from the beginning, so I gave her a boot and she jumped beautifully.

We came down the huge bank towards number six, fell on our faces, and stopped again at six. I knew I had only one refusal left now, so I woke up and gunned it back at the fence and she jumped it well. 7, 8, and the combination at 9 were on a series of difficult rollbacks and we nailed the line to every single one, popping over the fences with no difficulty. I relaxed as we cleared number 9b and my brain left, again. We cantered towards number ten, Arwen asked if she should jump it, I said, “Huh?” and she knelt in the middle of it instead, demolishing it thoroughly and putting the finishing touch on the most ignominious round of my competitive career.

I didn’t whack her for any of the stops. In the circumstances it would have been ridiculously unfair; if I had just given her a little leg going into them I bet she would have jumped every single fence with her eyes closed. Poor old Arwen. I gave her an apologetic pat as we left. There was nothing more we could do about it, and on the bright side, because it was only EV70, we were still allowed to run cross-country the next day for schooling purposes.

This was a good thing, because the course map had me quailing. Arwen has never jumped a ditch in her entire life and the second element of 10 (also her first xc combination) was a ditch. It was a large black abyss, probably with some lava at the bottom. Number 14 was also a ditch, a large one with gigantic scary owls on either side, and there was a drop about the same height as the Victoria Falls.

Warming up for xc, I was quite worried that she was going to try stopping again just out of habit, but this time I was awake so I actually steered and pushed the go button so she took me over every practice fence we looked at without thinking twice – including an 80cm skinny as big as a house. She was blowing fire as we came up the hill to the startbox and after the countdown from five and saluting the King, I put my spurs in her and she came blasting out looking for something to kill. Number one was inviting so she hardly broke her stride sailing over it and roared off towards number two, max height and wide, no problem for her – she just ate it up. We had a little stumble crossing the dirt road, but she caught herself quickly, clicked back into her stride and bounded over number three.

I was convinced we were going to stop at number four. It was a sharp turn right into the woods to a skinny fence with bales all over it, and it caused plenty of grief to other riders that day. Arwen came at it locked and loaded and just charged over it as if it wasn’t there. Number five was simple but its approach was complicated by a branch, which was kind of in the way, except Arwen is 14.3 and I’m 5′ 4″ so we just galloped under it because we are awesome. She took 5 and 6 in her stride and then charged up the long blast to 7.

Seven was intimidating: a stack of logs, low but wide, and the horses could just catch a glimpse of the water as they approached it. Three riders were eliminated there, and as we came up to it I felt Arwen looking and tried to kick her except my legs didn’t want to cooperate so I just made a little smoochy noise instead and poor longsuffering Arwen hauled my sorry backside over that fence and saved the day. She wriggled into the water, walked a few steps, trotted, scrambled out and willingly jumped the low side of number 8, a step. We flopped up the hill at number nine without any juice at all and Arwen put up her willing knees and did a riding-school-pony-pop over it, dragging me with her once again. 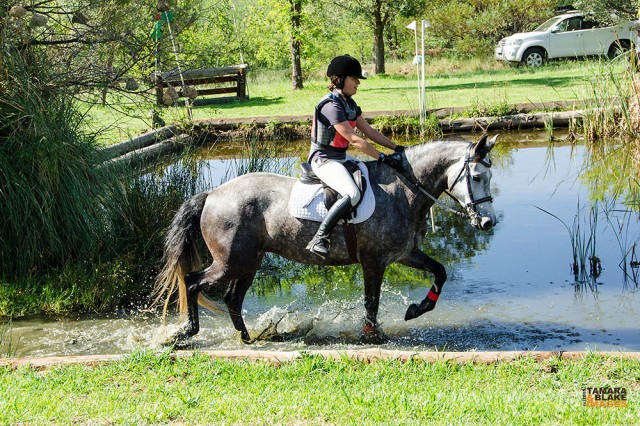 The stretch from 9 to the Combination of Doom was huge and uphill, so I let her go and she ate up the ground. At the turn to 10 I brought her right back down to a little working canter, shouting, “Arwen, LOOK at it, theLordismyShepherd Arwen LOOK!” Arwen declined. She popped over 10a and then while I was still trying to massively override 10b she was already over it and galloping off, saying, “What? It’s just a hole in the ground, you stupid little human,” while I sat there flabbergasted.

Number 11 scared me. It was under a shed and had shavings bags under it, but mercifully it was small, and Arwen had a mighty look but jumped just fine. 12 was also intimidating and she had another look and another good jump. Then came number 13 and as she saw it she leapt straight up into the air, whereupon I bounced up like a kid on a Thelwell pony, landed with a big kick, clung on and scrambled over.

We opened up the throttle on the stretch to the next ditch, which I was no longer worried about; Arwen said that because it was wide it was easy because one could jump in it instead of over it. This caused the jump judge to squeal in alarm but we shot off before she could do anything about it. 15 was a bit spooky but I slowed her down enough that we made the turn and climbed over it fine. By this point, my legs were just done. Somehow, despite spending the hours I do in the saddle, I had totally missed out on the fact that my cardio fitness sucks. I had been running on adrenalin, which promptly left as we cantered down to harmless little number 16 and stopped. This gave me a goodly adrenalin rush, so I waved my crop around and Arwen jumped 16 and the mighty drop at 17 without turning a hair. One last effort of galloping and we took 18 in our stride, blasting through the finish and stopping on a dime as is Arwen’s trademark.

I was euphoric as we left the xc with my panting pony. Despite the silly stop and copious time penalties, she had never felt more confident across a more challenging course ever before. One thing is for sure: The horse can do the job, and she loves it. The fault lies with me, but I know that just like that good little grey – “the spunky little grey”, as the announcer calls her – will take none of my inferior nonsense and will haul my sorry butt over into excellence just the way she hauls it over oxers. Glory to the amazing King. 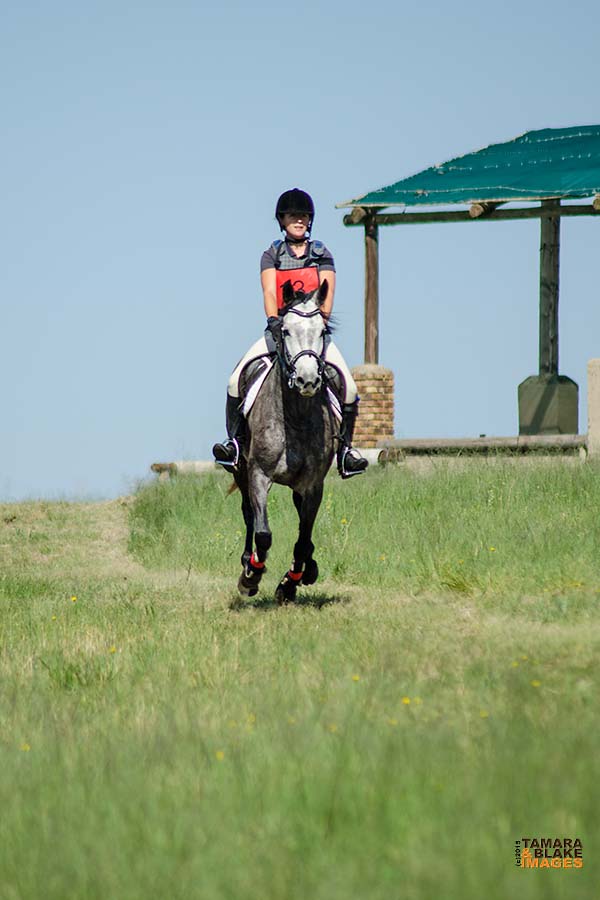