Our last event of the year was also our first time at a gorgeous old venue right in the deep horse country of Kyalami. It was too beautiful not to photograph, and Amanda from the $900 Facebook Pony and her epic course walks inspired us to try something more imaginative than just taking pictures of jumps.  Hence: the Epic Puppy Course Walk, courtesy of my sister Rain, Ice the puppy, and some mild delirium due to sleep deprivation.

Coming out of the startbox, the track went straight towards number one. The top pole was taken off for my class, so it was a very simple little log, but it was a steeply uphill approach. It was a fair preparation for the relatively challenging course, but it rode well for all but one rider, who had 60 penalties here. 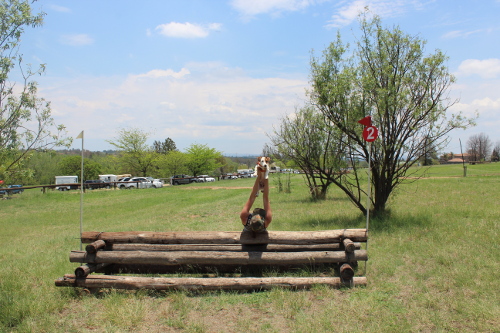 This was a max height A-frame and looked rather imposing, but as A-frames seem to do, it rode beautifully. 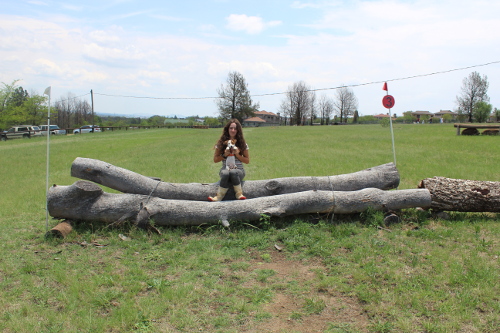 Number three rode as nicely as Ice is cute, although it was a fairly wide oxer.

Number four was terrifying. After number three the stretch was just long enough for one’s mind to wander, followed by a 90 degree turn and only four or five strides into the shade and to this narrow fence with bales all over it. Unsurprisingly, three riders had stops here.

Number five was slightly complicated by a branch that hung in the approach, forcing one to jump at a slight angle. Except if you ride a 14.3hh pony. Then you just go under the branch. (Epic win). All the horses navigated this one just fine.

Number six was beautiful – a straightforward log at the end of a long straight gallop, just asking to be jumped straight out of a big stride. It rode like a dream.

Number seven proved to be the most problematic fence on the course, with three eliminations. In itself it was quite low and not the widest fence, but the horses could just catch a glimpse of the water as they jumped, so a lot of riders came to grief here.

The water was rather a pain. It wasn’t flagged, but approaching number 8 was almost impossible without going through it. Circling would set one up for a perfect approach, but it did mean entering the water twice. Arwen was hesitant to go in the first time, so I made a very tight 90 degree turn to number 8 and made it out that way. If she would trot into water I would undoubtedly have circled.

8 was a little step, with a higher section (pictured) and a very low one. The higher section was easier to approach, but because Arwen was basically jogging once we reached it, we took the lower one and the line from 8 to 9 rode just fine. 9 is the double log in the background.

Number 9 was unassuming, but it was a short, steep uphill approach from 8. If one lost impulsion through the water and wasn’t quick to get it back, it was very easy to get a silly stop here. Everyone managed it fine, though.

10a and b were a fairly terrifying combination for the level. This max height vertical was 10a, with just two strides to…

… our first open ditch ever. It wasn’t very wide, but it was pretty deep and I was scared out of my socks. This combination rode well for everyone.

Number 11 was set underneath a shed, which was a little intimidating. The log itself was very low, though, so it didn’t cause any issues. It was a very fair question.

This skinny was set in the middle of a massive field all alone, asking for a run-out. Luckily for me, Arwen locked onto it as she jumped number 11, so she jumped it almost as well as Ice. It did cause a stop, though.

Spooky number 13 (less spooky without a balletic teenager on it) was the culprit of the only rider fall on cross-country, but it was actually pretty low in the middle and the approach was easy enough.

There was a long gallop to number 14, the second open ditch on course. This ditch was really very shallow and caused no issues.

Number 15 had a fairly difficult approach – a quite sharp turn up a hill. Arwen and I slowed down, angled it and jumped fine, but it was quite big and spooky. 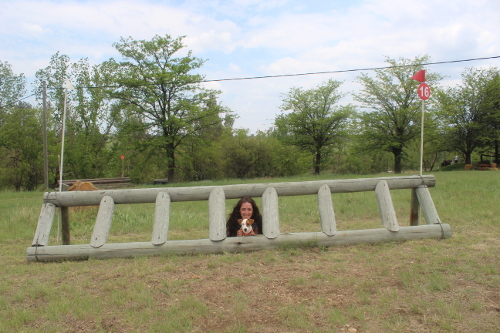 16 was an extremely inviting little slanted ladder and rode well for everyone except the resident idiot (viz., me). Its landing was slightly downhill, nicely preparing us for

a drop that looked about the size of Pride Rock on the morning of the competition. It rode beautifully for me, though, and all the horses jumped it on the first shot. 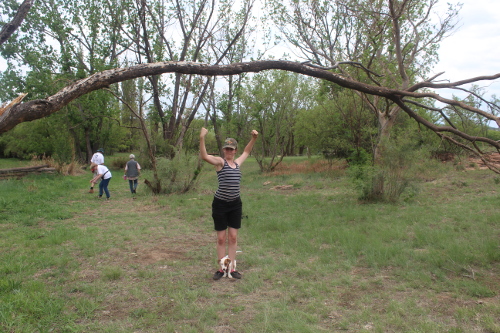 This branch was another epic win for Arwen and me. We just ran under it like bosses. 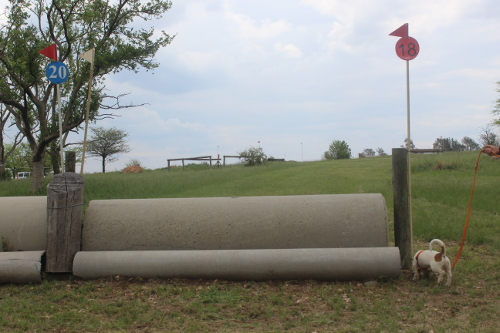 18 was a last challenge – a max height oxer set on an uphill as the already tired horses headed for home. This caused no issues, though, and rounded off a beautiful and well-built course nicely.

Needless to say, the ditches had me trying to digest some butterflies, but it turned out to be the showjumping I should have worried about…