Bear with me, guys. At some point I will finish catching up on all the shows and you can hear about horses that aren’t grey.

The latest expedition was to a big venue up in Kyalami that holds frequent and very handy training shows. I rode the adorable Reed there last November, so I knew I could expect it to be pretty busy.

First, I must rewind a little. On Saturday evening the Mutterer and I first made a trek to Grootvlei to pick up two horses; a chestnut gelding (my next training project for the Mutterer, incidentally named Duiwel, which means “demon”. Charming, right?) and dear beautiful Arwen Jnr., who was coming to the show with us and would spend the night at my home. I only really have nice things to say about Arwen Jnr. so I may as well call her by her stable name – Nia-Nell. Or Nell because it just works for her.

Despite the Mutterer’s dire prophesying, Demon (don’t worry, I renamed him) refrained from killing anyone when loading, and despite my misgivings he did not kill himself in the horsebox on the way to Nell’s home. We were all fairly composed when we got there, and Nell got on fine with the usual arrangement: me cajoling and patting at the head, and the Mutterer swearing and pushing behind. I was also certain that Demon would shred Nell on the way to my place, but as usual the Mutterer was right and they were both completely fine when we got there. They were so happy with each other that we decided to let them stay together that evening to stave off any would-be loneliness.

Everybody was still alive the next morning, which is always a good thing when new horses have arrived, so with my sister’s help we scurried through a quick grooming and bubble-wrapping of Arwen and Nell before shoving them both in the box with aid of a lunging line. Luckily, Nell travels like an old hand, so she turned out to be a good influence on Arwen and both the girls were happy and relaxed when we got to Sunlands. This was a good thing. The parking lot was FULL, with kids and ponies and bellowing instructors everywhere and somebody’s harrassed groom trying to retrieve an insane thoroughbred from the bonnet of a nearby BMW. The family had the paddock up in record time, and Arwen was stuffed in there to wait while I dealt with Nell. She was actually quite all right – looking around, but quiet – and even stood dead still with a haynet to have her mane plaited. Because she also has a gigantic wonderful thick torrent of hair, we did it in a stallion plait. Unconventional, but it worked like a charm, and is henceforth my solution for natural manes and dressage.

When I had her walked down to the arena and popped on, for a few minutes I thought I was sitting on a firecracker. She was okay – obedient and listening – but spooky as anything. The poor animal has never even been on sand footing before, so first we had a spook at that, and then we had a spook at the White Cone of Death beside the arena and then we had to panic a couple of times about the ponies careening around at a ridiculous pace (showjumpers were warming up with us dressage bums). As we walked around, though, I discovered that violence was the furthest thing from Nell’s mind. She’d balk a little, and look a little, and maybe have a weeny little shy, but nothing else. No bucking, no bolting, no teleporting. For a horse that’s only rising four, she was superb. And once we’d had a bit of a trot around she put her little nose down and went to work just like we were at home. I was jumpy about the canter transition, but I didn’t need to be. She flowed into her canter like water to the shore. 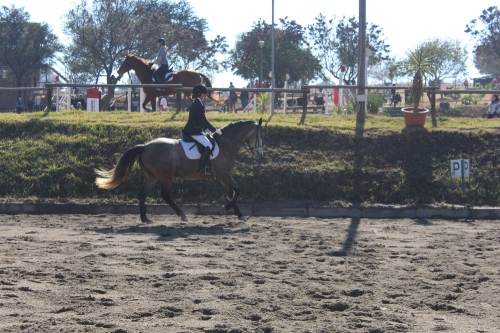 I still can’t get over the amount of talent contained in those 15 hands of Nooitgedachter. I have very seldom ridden a horse with better paces or a better mind. I think the Storm Horse could have had better movement than her if he had been dressage schooled from the start, but apart from him, there are very few exceptions to her natural ability to move in rhythm and balance and connection. She just knows it somehow. It’s amazing. And paired with the unbelievably trainable brain of the true Nooitgedachter, it’s a combination that will someday be unbeatable if somebody took the time to school her to the top. (I sure wouldn’t mind being that somebody).

Anyway, soon we were making our way to the show arena and Nell was staring at everything but not being a pest. The dressage arena at this venue is very spooky. It’s sandwiched between the noisy jumping arena with its leaping horses and loudspeakers, and the little cafe thingy with its sizzling sounds and noisy people. And on the far end is a judge’s box that harbours all kinds of monsters, not to mention the dressage letters. Poor Nell thought she was walking into a death trap. It took us about five minutes to get from A along the track to C, but I let it. Nell is not stupid, and I knew if I gave her the time to think she would come to the conclusion that all is well. We walked up to every letter and I had her touch it while I patted her and told her she was okay. In this fashion we made it to the judge, who, to her great credit, showed not an ounce of impatience. She told me to just keep doing what I was doing, and even led Nell over to C from the ground to help her courage a bit.

If I had had another twenty minutes I could have gotten her quiet about the judge’s box. As it was, our tests were a bit inventive since she didn’t really want to go any nearer than M, and we had quite a few impromptu leg-yields. But amazingly, our FXH free walk was perfect. As soon as she was facing away from the box, I could give her the reins almost to the buckle and she put her head down and marched happily to H without a care in the world. She is an amazing little horse. Even despite getting a few 3s and 4s for teleporting sideways when we were supposed to be making a stretchy trot circle, she got 55.5% for Prelim 1 and the judge was delighted with her. Her good moments were all 7s, and for a first show on a horse that young, which has been under saddle for six months and gets ridden once a week, I’ll take it.

Nell was a joy to ride, but I was pretty happy to get on my grownup horsy and be fine. It took me a few minutes to settle down and realise that Arwen knows her job and we’d be fine, but once I did, she was awesome. A few times she totally did not understand why we  weren’t jumping or galloping around, but then her brain kicked into dressage gear and she was superb. Our warmup was inordinately long as I misjudged the timing, so we spent a lot of time trotting around, walking, getting off, getting on, more walking, more trotting, etc., but I think it was good for her. We only had a little bit of canter since I didn’t need her to get fired up and start looking for things to jump over, and lots of free walk to stretch and relax. I think we were warming up on and off for over an hour. At last we went into the arena, and my horse was calm and supple and working in every muscle of her body. It was rather a relief to come down the long side for a square halt at C and then to sit on a loose rein while I introduced myself to the judge. Arwen sniffed C curiously and then started to eat the grass under it, to my relief/mortification.

The judge asked, “Another youngster?!” to which I replied, “No! Luckily, not quite so young as the other one,” and the judge said, “Oh, good!” She also thought Arwen and Nell were sisters, which is entirely pardonable as they look pretty much exactly the same despite having no relation at all except for both being Nooities. Then we trotted off, the bell rang, and it was time to go. Down the centre line, easy halt at X, and I looked up far past the judge’s box to where the big blue African sky was smiling down at me, and I saluted the King. 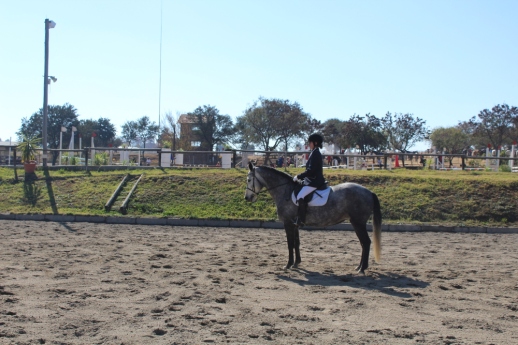 I knew when we came straight down the centre line that Arwen was going very well. And when we made our first stretchy trot circle and she put her head down between her knees, I really relaxed. So we rode our tests joyously, effortlessly, with that wonderful feeling of oneness that is so addictive. There’s no feeling quite like it when you find your spine apparently fused to your horse’s, every movement of yours speaking volumes to your horse, muscle to muscle, heart to heart. You can call it losgelassenheit, or connection, or working through the back, or riding from the seat, or simply dressage; but it doesn’t have a name, not really. Arwen was loving it in her own quiet way, performing for me with elegance and relaxation and quietness, striving without tension, revelling without rebellion. For me there are few truer ways that a horse can love. This is why there really are no voice commands in dressage; because dressage is about stepping into the inner chamber where words are far too clumsy to communicate.

Wax poetical though I may about my Novice tests, they definitely weren’t perfect. We had a little buck into one transition, she flexed to the outside occasionally, the canter wasn’t as rhythmic as it should have been and our lengthenings were, as normal, totally mediocre. But we had some good moments and even one great moment, and the judge, the horse and I all enjoyed it thoroughly. The judge announced that Arwen was stunning with a divine walk and a brilliant mind, and I sat there beaming idiotically and slapping my pony’s neck with my new white dressage gloves.

In the end, we did pretty well. We got mostly sevens, with a sturdy eight for every free walk and a nine for that one amazing stretchy trot. I got sevens for rider position which was less than I wanted but pretty much what I deserved. Our highest score was 67.8% in Novice 1, which solidified my decision to go graded in dressage at Novice; I wouldn’t be too ashamed of scoring that, even if we wouldn’t get a bunch of ribbons. And as for Arwen, she was just happy and chilled and doing the job she enjoys.

And as for me? Well, I’m just ridiculously blessed to halt at X, put the reins in one hand, look up at the beaming sky and then salute to the One Who made horses and people and all of this possible. Thank You, Abba, Sir.