What can I say, I’m actually a cooler blogger when I have a little extra time on my hands.

I got done studying early today because I gave up on English (exam is tomorrow, tutor has already told me to rewrite the exam in November, super promising, right?) so I had a subject less to slog through. In all seriousness, I did not give up on English, I merely decided that cramming is not my style. Besides, it’s English. What’s to cram? One day’s practice is not going to solve my apparent suckiness, although don’t tell my numerous editors that I suck at English because apparently they did not receive the memo and accept my work anyway.

Magic was first up, and seeing as he burnt quite a lot of energy yesterday, I just lunged him for a few minutes before getting on. He was excellent and calm to lunge, so I expected him to be just fine. He stood like a saint for me to get on and then walked quite calmly into the arena, right up until the point where we passed some rather high khakibos (brush, to non-South Africans) and a tiny sparrow chose that moment to come whirring out of it. Whereupon Magic entirely lost his mind and leapt about three metres into the air. When he touched down I was luckily ready for more freaking out because he did it again, flailing his legs and face in all directions. He was typical Magic, though – no bucking, no shying, nothing dirty, just a total mental meltdown while I sat there like: 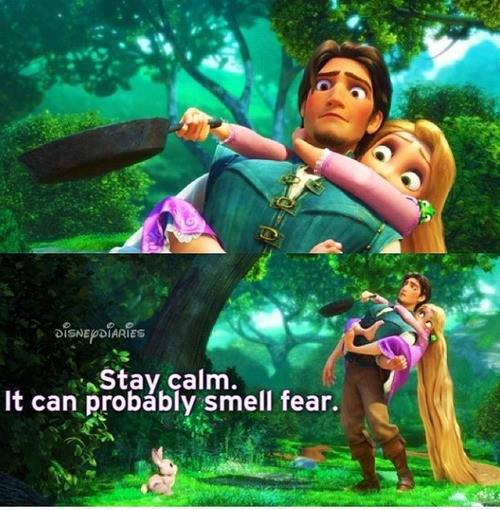 until he returned to earth and stood there quivering. Poor guy. Life is so hard on him sometimes. I patted his neck and told him that he was okay, and lo and behold, he believed me. Our relationship truly has improved vastly; neither of us were extraordinarily rattled, and we put it behind us and continued the session calmly, with only one more terrified leap-flail until Magic went to work and totally forgot about the flesh-eating giant mutant monster sparrow. He was, after that, truly excellent. He didn’t buck, he didn’t poke out his nose, and when we jumped a little teeny cross he didn’t turn a hair. I have to seriously work on trusting him to the jumps, though. He doesn’t deserve me hanging onto his face. He’s got this.

Thunder hadn’t been ridden for three weeks due to shows, flu, and the general chaos that my life had dissolved into, so for the first time in many months I threw him on the lunge for a few minutes. It was amazing to see how much stronger he’s become. He used to canter like a real baby in the ring, haphazardly, occasionally disuniting and sometimes crashing into the sides for lack of balance. Today he picked the right lead and cruised around on a little circle with apparently no effort.

Riding was a different story. The Bush of Killer Sparrows was apparently deadly to Thunny as well, so he spooked violently every time we passed. Same story – nothing dirty, just his standard spin-run maneovre. I was unimpressed with him because it’s unlike him to be quite that stupid for quite that long over a relatively minor spooky thing, but I put it down to vast amounts of excess energy. We didn’t do much apart from circle around and around in the scary end until he gave me one relaxed walk circle on a loose rein. His lope was all over the place, way more than it has been recently, but he did spin and rein back very nicely for me.

Arwen is entered into her next event (again, an unaffiliated class at a recognised event) in the end of May. I’m not sure whether to be happy or worried. Happy because it’s at President’s Park over fences that she’s jumped before, so the spook factor should be minimised and travelling shouldn’t be a problem.  Happy because it’s a one-day, so we don’t have to spend the night in a stable again. Worried because it’s a one-day, so poor Arwie will have to do showjumping and cross-country on one day. Fitness is obviously quite a priority, so we went for a ride around the neighbour’s maize fields. I’m not allowed off property without my trusty guard dog, Blizzard, who is quite unfit, so we kept it down to 6km and had a couple of walk breaks, but we definitely burnt some energy. Currently we’re working on trying to find a variety of different types of canter – obviously our working canter, then a showjumping/medium canter, a highly collected and bouncy “changes canter”, a big travelling hand-gallop that I’m trying to make just over 25kph (440mpm), and of course our full gallop. Always fun to be going at speed on a fit horse.

The Mutterer has sent me a new mare to school after I sold his beautiful roan gelding to an awesome family. The little mare has already been sold but was out of work for a while so she’s just getting a quick tune-up. She is a rock solid, totally unflappable ride, her only flaw being some laziness, which the dressage whip should fix pretty fast.

Glory to the amazing King.