Yay for blog hops! Seriously, I love them, and Hand Gallop has chosen a totally awesome subject for her first one. Kudos!

We’ll start with Skye, like we always do. Long, long ago when we bought Skye, I was still so little that I wanted to name her Mango because I liked mangoes and she was sweet and orange. (In retrospect that does kind of make sense, but the name definitely smacks of seven-year-old). My dad, sister and I were having a tremendous argument about it when my mom said, “We’ll give her the name you never got.” I was going to be called Skye until my parents tried saying “Skye Hyde” and gave up. It’s a pretty name, so Skye she became. Years later when I was registering horses I lengthened it into Skye’s the Limit because she always made me believe that we could do anything – that the sky’s the limit. 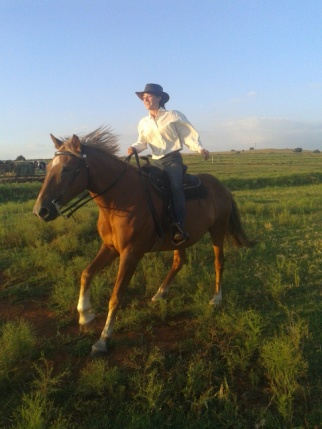 Arwie’s breeder was a major Lord of the Rings fan, so it wasn’t much of a shock when she named the dainty little black filly Arwen. I think it really suits her. She’s sharply pretty, has a star on her forehead, and in the words of the Mutterer “she’s got ears big enough for any elf.” When I was trying to give her a show name, I only had to scroll down a list of the LotR Arwen’s full names when I saw Arwen Evenstar and it fit like a glove. The diamond on her forehead fulfills the name perfectly.

The worst part was at this one show where the announcer simply could not get her name right. I was thoroughly tired of being announced as riding “Erwin Ehvenstur” by the time we got a placing and the guy showed up to give us our rosette and complained about her name. The worst? He was English and had seen Lord of the Rings. Seriously, announcer dude?!

Arwen actually spent a large portion of her three-year-old year being called “Missy”. She was a little gawky plank of a horse and didn’t seem to quite live up to “Arwen” yet, so she became Miss A and eventually Missy. When she had her third foal, I quit on the idea of “Missy” and she became Arwen again.

As for Baby Thun, I wanted to name him something related to his parents’ names: Skye and Achilles. I liked the sound of Thunder as a colt’s name and it worked with his mom’s name, and I was heavily into mythology at the time so Thunderbird came naturally to bring a mythical element in from his dad’s name. If he was a girl, he was going to be called Ladyhawke or Sonador. To be honest, I didn’t give filly names much thought. I wanted a colt, I prayed for a colt, and I believed so hard that it was going to be a colt that I don’t think it could have been otherwise. Poor Thunder’s greatest downfall is that I didn’t consider any Afrikaans people when I named him. The “th” sound doesn’t exist in Afrikaans, so he’s generally known as Funner.

Lastly, Magic. The poor dude raced as Gadsfly. He was only 15.1hh when he came off the track, so I can only imagine that he must have been a tiny black yearling that buzzed around like an annoying fly and was hence named Gadsfly. Poor guy, it’s no wonder he lost all his races, I also wouldn’t want to win under that name.

By the time I met him, everyone knew him as Magic, which seemed to suit him well so it stuck. I abandoned the Gadsfly idea when it came to registering him. I liked the “fly” part and I liked his stable name, so I plopped them together and came up with the ridiculously cheesy Magical Flight. I know it’s a pony name, but it suits him.

One day I actually asked his previous owner why she’d decided to call him Magic, and her reply was so spontaneous and so true that I doubt I will ever forget it. “Oh,” she said, “because he is.”

6 thoughts on “HGBH: Magic Because He Is”