Whenever I meet a stallion, my first thought is usually “Should he really be a stallion?”

While there’s a lot of thinking going around that stallions are by default miserable, savage, difficult, dangerous creatures who need to be castrated as soon as possible, I’m not really under that illusion. Stallions are horses just like any other horses, and the possession of their manliness is by no means automatically a cause of unhappiness or aggression. It depends largely on how they are managed; sure, if you’re going to overfeed him, lock him up in a paddock alone and out of sight of any other equines, and spoil him with little work and no discipline, then he’ll likely be a danger to himself and to everything else. A well-managed stallion, on the other hand, can be a joy to ride and handle, even though he’ll probably always need an experienced person on hand to make sure the wheels don’t fall off if a mare on heat wanders in. The wonderful Lipizzaner stallions performing within inches of one another with not a squeal or kick, and the innumerable stallions competing alongside their female colleagues at the very top level, are a testimony to that fact. Even the little palomino at the stud is a shining example of a good stallion. You could put beginners on him. 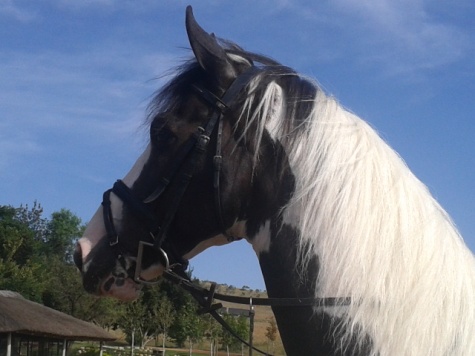 Also, obviously, we need stallions. Otherwise there wouldn’t be horses. A high-quality, well-managed stallion is the king of the equine world and a thing of grace and beauty, plus usually makes high-quality babies, which is good.

However, there’s no denying that stallions can be difficult to manage without the right facilities and experience. (You just can’t turn them out with open mares, for instance, if you’re being responsible about it; and many of them will break out of ordinary paddocks). I learnt my lesson the hard way when my stallion escaped and resulted in three unwanted pregnancies; there will be no more stallions for me until I have the right facilities for them. But possibly the major issue about keeping stallions is that sooner or later they are going to breed. And in my opinion, if we are going to be responsible horse people, horses should be bred with a purpose in mind, and their parents should be selected as horses that have already proven and excelled at that purpose. In general, I’m not a fan of backyard breeding. I’d recommend leaving it to the professionals – even if that just means taking your mare to a quality outside stallion instead of using the farmer’s stallion down the road.

But with all that said, I still don’t for one moment regret breeding baby Thunder. And many people may frown upon me for this because by conventional standards I did nearly everything wrong. Let’s start with the mare: a creature of absolutely unknown breeding, who stands with her toes in, has a rather fleshy throat and a crest like a stallion’s. As for the stallion, he was an unbacked three-year-old and the first entire male horse I could get my hands on. Granted, he had a good temperament, nice proportions and okay conformation but his feet were the wrong shape and he was also a crossbred, although with a very strong Friesian influence and a well-known grandsire.

So, I hear you ask, why didn’t it all go pear-shaped? 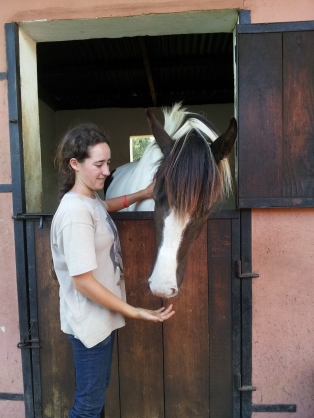 Mostly, by the grace of God. I make a lot of mistakes, but He can be relied upon to rescue me from the worst of the consequences, as long as I figure out not to make them again. Secondly, my one practical redemption was that I actually did breed Thunder with a purpose in mind: he was going to exist to be my pleasure horse. And since Skye, pigeon toes, fat neck and all, is without a shadow of doubt the horse who has given me the most pleasure in the entire universe, and in terms of temperament and character is a horse in a million, she was simultaneously utterly unsuitable and completely perfect for breeding. I’ll take character over conformation any day. Achilles also had a fine personality; he ruined my confidence, of course, but that was through no fault of his own; he was a forgiving, stoic and loving horse. And so Thunder was conceived, and so he was designed by the hands of my King.

If I was to breed a horse today, I would work and save up and work some more and save up some more and then buy a mare from the cream of the crop – preferably an old broodmare who’d proven herself over and over again in whatever discipline I was intending to breed for. If I couldn’t afford a proven broodmare I’d get a youngster and prove her myself. Then I’d take her to the best stallion I could afford, one that had proven himself in both his own career and in his offspring, and breed them. It’s a very different approach to the slapdash one I took with Thunder, but I still consider him a resounding success.

You see, I aimed to breed a gentle, loving horse who would be game for anything; something with tremendous willingness. Not the type of horse who would go to the top level in competition, but the type of horse who opens his mouth for the bit and would gallop until he dropped dead if you asked for it. Something infinitely kind, generous, and trainable. In terms of conformation I wanted only soundness, functionality, and a pretty neck. Oh, and I wanted a colt with a coat colour the same as Skye’s and a star and preferably a sock or two.

And so God gave me Thunder, who fits the bill exactly. (Okay, so the mane and tail is black, but the coat is the same colour). He has already grown into the kindest baby horse I’ve had the pleasure of working, and he still has a lot of growing to do. Thunder is a heart horse, the kind of horse I’ll never sell, the kind of horse I’d spend a lifetime on. That’s why, even though I’d never breed anything else the way I bred him, I consider him a great success. God even blessed him with relatively nice conformation – he does show an ever-so-slight toe in, and his back is just a shade too long, but overall he is a functional, nice-looking, gentle, loving guy.

Regret Thunder? Not in this world. I love this horse.

2 thoughts on “On Breeding, and Why I Consider Thunder a Success”