I know Secret wasn’t ever really supposed to be born; in fact, I didn’t even know he was on his way. On the evening of December 1, 2011, there was one round horse and the next morning there were two flat ones. Hence the name: he was Arwen’s little secret.

Still, I won’t say that I minded the sight of this gentle little dark bay creature gambolling around at his mother’s side, and as time went on I had to conclude that Secret was the easiest foal I ever had the pleasure of working with. Yes, he was even easier than Thunder. He was infinitely trainable; smart and willing in equal amounts. I could not have faulted his temperament.

Sadly I had eight horses at the time as well as a job at the stud and I couldn’t keep up with all of it. It was still with a heavy heart that I sold the little bay colt after he’d been weaned, but I knew he’d gone to a good place. His new owner was about nine years old and utterly in love with her new baby horse. They would grow up together. With that temperament and his size, Secret was the textbook perfect child’s pony. I could see him becoming to that little girl what Skye had been for me – the playmate, confidante, best buddy during childhood, the steadfast friend during adolescence.

It is with an aching heart that I say that it was not to be. Secret was killed by lightning on Monday night. Sometimes the best horses leave us soonest; it is God’s will, but it is still hard. Hard for me, who hadn’t even seen Secret in a year, because I remember his gentle eyes and his quiet manner and the way he stretched out his little brown nose for his new young owner to feel its inexpressible softness. I remember his milky breath and tangled whiskers as a baby and I remember watching him play with his little brother and chew his mother’s halter and sleep quietly with his head in my lap. But oh, so much harder for the little girl who loved him.

Every horse deserves, at least once in its life, to be loved by a little girl. I thank God that Secret knew that love so early. And I thank God that He is a loving God, and cares for whatever happens to the souls of horses when they die.

Rest in peace, Secret. Your life was good, your death, painless; and even in your short two years, you were a great little horse.

You will be missed. 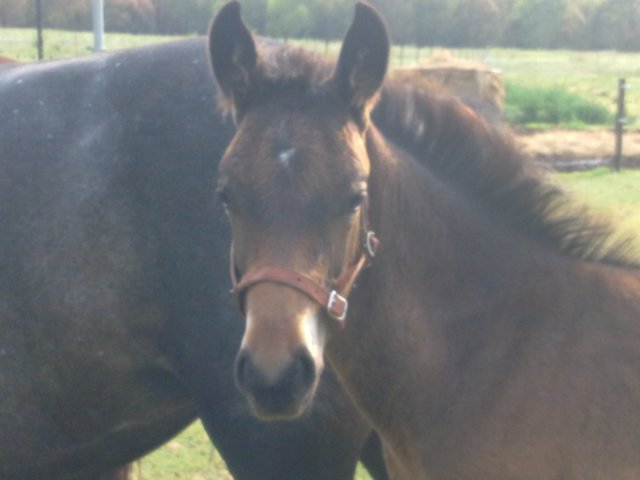 One thought on “Arwen’s Little Secret”